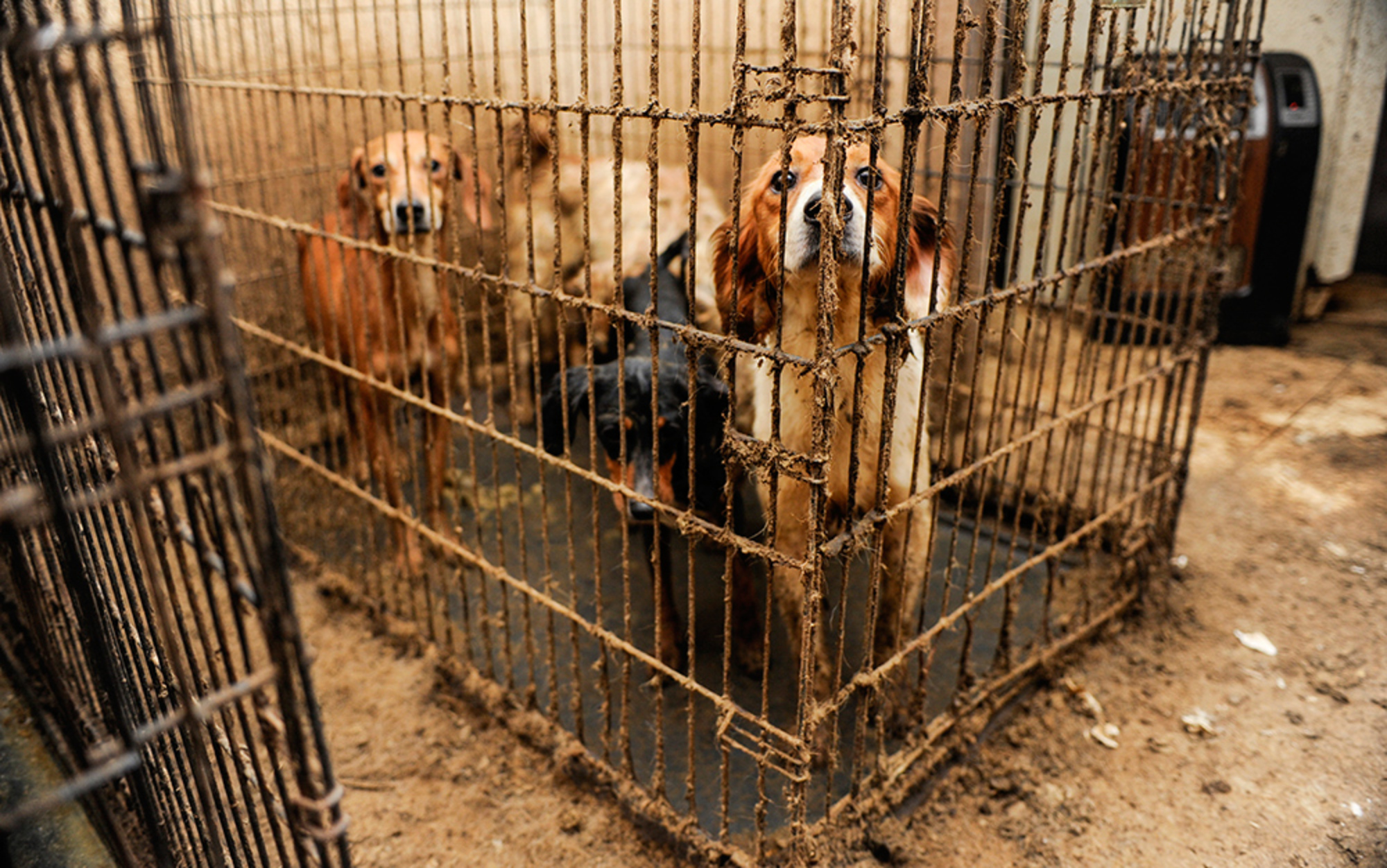 On Friday 19 December 2014, approximately 60 dogs and other animals were rescued from atrocious conditions in Sequatchie County, Tennessee. Photo by Kathy Milani/The Humane Society of the United States/PA Photos

‘No kill’ animal shelters have unleashed an epidemic of suffering, but is a life of misery any better than a quick death?

(Sabine Heinlein is a non-fiction writer whose work has appeared in The Paris Review Daily, Die Zeit and The Iowa Review, among others. Her most recent book is Among Murderers: Life After Prison (2013).)

March 2013, my husband and I were on our way to a museum when we saw a sign advertising an adoption event at the Petco pet store on the Upper West Side in New York City.

‘Should we adopt another cat?’ my husband asked. We’d got our scaredy-cat Gilbert from the American Society for the Prevention of Cruelty to Animals (ASPCA) the year before: he was sweet and funny but so neurotic that we considered calling him Woody; a vet had suggested that a friend might ease his problems.

At Petco we were approached by Gisella McSweeny, the founder of Zani’s Furry Friends, one of more than 150 rescue organisations that partner with the Mayor’s Alliance for New York City’s Animals, whose mission is to save as many animals as possible from the city-run Animal Care and Control of NYC (AC&C). Since 2003, the Alliance and its partners have held regular adoption events with cute monikers such as ‘Whiskers in Wonderland’ and ‘Adoptapalooza’ at Petcos across town.

When we told McSweeny about our Gilbert, she quickly led us to a cage housing two cats that were grooming each other. One was a fancy Maine Coon; the other, a grey-and-white, McSweeny assured us, was our cat. She rattled off his sad story: Zani’s had pulled him and his brother from the city-run shelter and put them in one of their privately run foster homes. While the brother was adopted, this one was left behind. After McSweeny discovered that the foster ‘mom’ was hoarding animals, she transferred him to a second foster mom. The cat was healthy and equipped with a microchip, a rice seed-sized tracking device implanted under the skin to identify animals. There was no need to check references or conduct a home visit, McSweeny said; the adoption fee for the two-year-old was only $125, a special deal.

On the way home, I mentioned to my husband that our new cat looked like a barn cat. ‘Why not name him Barnaby?’ he suggested.

Barnaby was large and boney; he weighed only seven pounds. I noticed he smelled funny. He didn’t seem scared of us, just indifferent.

It was clear from the start that something was seriously wrong with Barnaby. He sneezed, his eyes were runny, and his ears oozed a gooey brown substance. His gums were bright red, he often had bloody diarrhea, and he threw up several times a week. A blood test revealed a severe Bartonella infection, more commonly known as cat-scratch fever because that’s how it can be spread to humans.

Then, on one of multiple vet visits we learned that Barnaby hadn’t been microchipped as McSweeny had told us. My husband and I emailed her and the AC&C, mentioning the missing chip. By email, a Jessica Van Brunt responded: ‘Kitten didn’t get a microchp [sic].’ I complained to the three people cc’ed on that email, adding that Barnaby also came with an eye infection, but I never received a response.

In a few months, we had spent around $1,500 on tests, dewormers, antibiotics and dental care for our rescue cat. But we still hadn’t resolved his gastrointestinal issues or gotten him chipped.

Our experience was not unusual. Today, thanks to the animal rights movement launched in the 19th century and the no-kill movement of today, slightly more people adopt their cats and dogs from animal shelters and rescues than buy from breeders. With more and more shelters pressured to keep animals alive regardless of the circumstances, an estimated 10,000 private rescue groups pull animals from ‘high kill’, city-run shelters and transfer them to private, supposedly temporary ‘no-kill’ foster homes for a saviour rate that the Humane Society estimates to be as high as 90 per cent. No-kill isn’t necessarily zero-kill, but that’s what its advocates aspire to.

No-kill advocates consider the killing of animals to combat overcrowding in shelters offensive and heartless. And sure enough, the ‘Adopt, Don’t Shop’ brand was originally based on a wholesome and noble sentiment. But with little to no oversight, it fosters an underbelly that has left the no-kill movement in crisis. The promise of life often leaves cats or dogs languishing in cages or transferred from foster home to foster home for years. Animals are given out sick, with minimal to no prior medical care. While numbers are still hard to come by, hardly a day goes by when a rescue or foster home isn’t exposed for overcrowding, neglect or, notably, hoarding.

While we dress our pets in matching pyjamas, saving, coddling and healing them, our ever-growing empathy for the furry has led us off the rails. As consumers, we are complicit in creating an inhumane and dangerous situation that leaves animals in pain, shelter staff overwhelmed, and pet owners burdened with unprecedented levels of financial and emotional stress. Struggling with Barnaby’s illnesses. I couldn’t help wondering who was benefitting from this tragic situation, and who was suffering the most?…

One thought on “The cruelty of kindness”