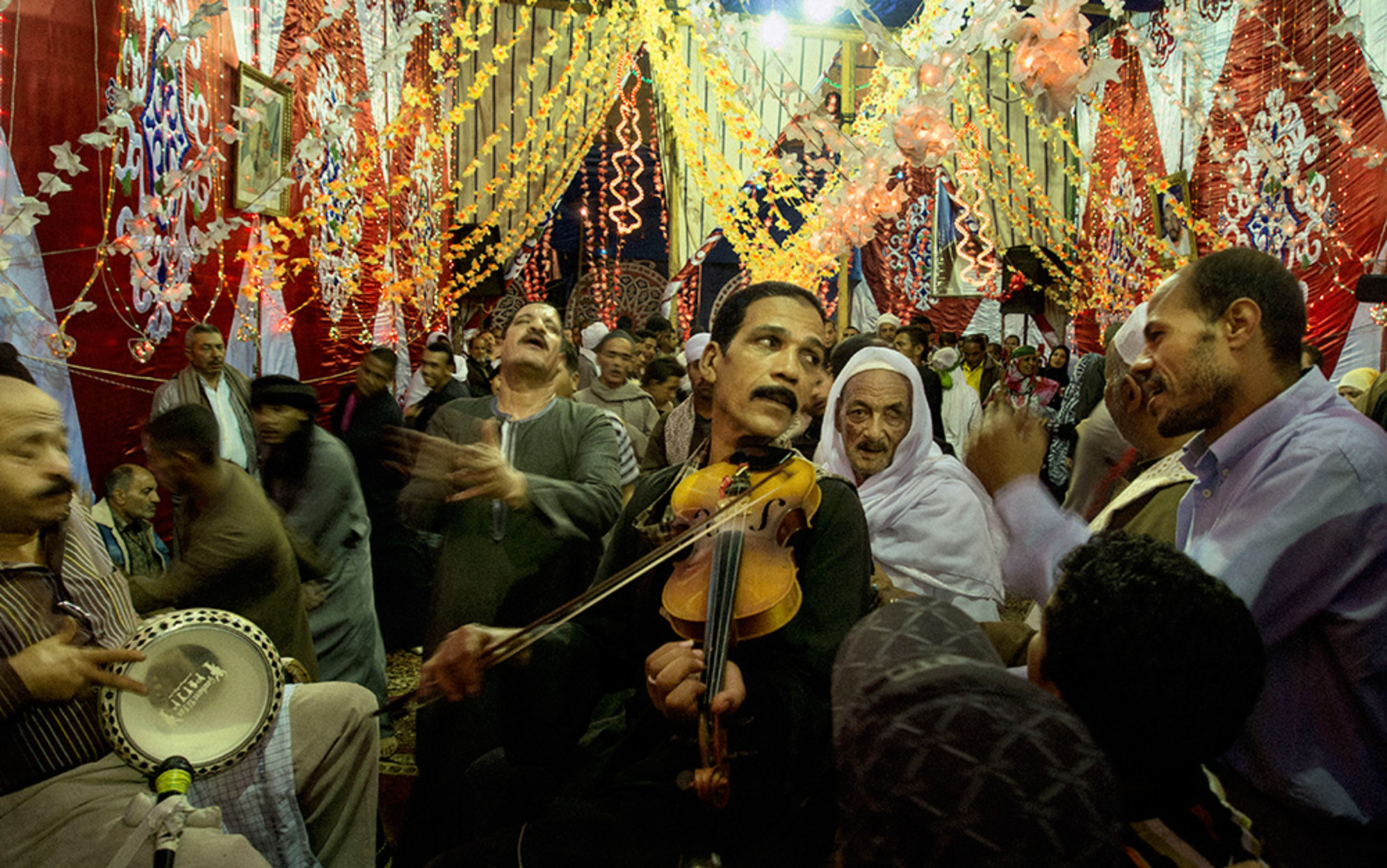 Sufi men dance inside a tent next to the Al-Ikhlas mosque in Alexandria, Egypt, during celebrations in honor of Sufi saint Sidi Burhan Al-Din Ali Al-Ikhlas Al-Sarkani. Moises Saman/Magnum

With its subversive poetry, rejection of politics, and ecstatic rituals, Sufi Islam continues to surprise and to thrive

(Nile Green is professor of history at the University of California, Los Angeles. His latest book is The Love of Strangers: What Six Muslim Students Learned in Jane Austen’s London (2015).)

I was lying in the dust, staring into the African sun, when their swords came down on me. The crowd was about a hundred strong, all of them Muslims shouting in a sonic blur. First they began slicing my arms. Next, pulling my shirt open, they cut into my torso. My eyes were closed with pain by the time I felt a blade moving hard across my throat. I thought I would die there, in that poor Durban neighbourhood where, despite the warnings of middle-class South Africans, I had decided to go exploring that evening.

Just minutes earlier, I’d turned a corner into a crowd of African and Indian Muslims. And then I was on the ground, being sawed with swords. When they finished with my throat, a dozen hands pulled me up again. Soaked in blood, I opened my eyes and saw it was just sweat. I was not even bleeding, though the scarlet lines from the sword strokes left wheals in my skin for months. Everyone was shouting, ecstatic. It was a miracle, a show of faith and power in which the Africans with the swords were well-practised. They were Rifa’is, a brotherhood of lower-class Sufis, and in the eyes of the assembly I had inadvertently renewed their prestige.

There are few of these Rifa’is left now, but a century ago they were numerous enough for travellers to give them a special name. They were called the ‘howling dervishes’, as a coarser counterpart to the elegantly balletic ‘whirling dervishes’. That latter name survived as a figure of speech when the ‘howling dervishes’ were forgotten. But this demeaning name hides a history of entanglements between Europeans and Muslims that redefined the Islam we now call ‘Sufism’. Together, European scholars and Muslim reformists decided that the popular and festive traditions of such dervishes were not true Islam, and not even true Sufism.

Writing in History of Persia (1815), the East India Company diplomat John Malcolm remarked that the Islam of the Sufis ‘is the dream of the most ignorant and the most learned’. Two centuries later, Malcolm’s epigram makes a good place to start thinking about the mystical Islam known as Sufism. On one level, it encompasses much of the popular practice of Muslim religiosity: it is an Islam of saints, miracles, pilgrimages, and popular displays of charisma of the kind I encountered in Durban. On another level, it consists of mind-bogglingly complex treatises in philosophical Arabic. This philosophical Sufism dwells on such doctrines as the ‘passing away’ of the lower self, the meaning of the Qur’an’s mysterious secret letters, and the ‘light of Muhammad’ manifested at the dawn of creation from God’s own primordial light.

At the same time, Sufism consists of an unfathomably rich tradition of poetry written in Arabic, Persian, Urdu and many other languages. The West knows little about this literature. This ignorance is a loss, for Muslims and non-Muslims alike, because such poetry – and its jokes and iconoclasm – forms a historic literary testament to a shared humanity…