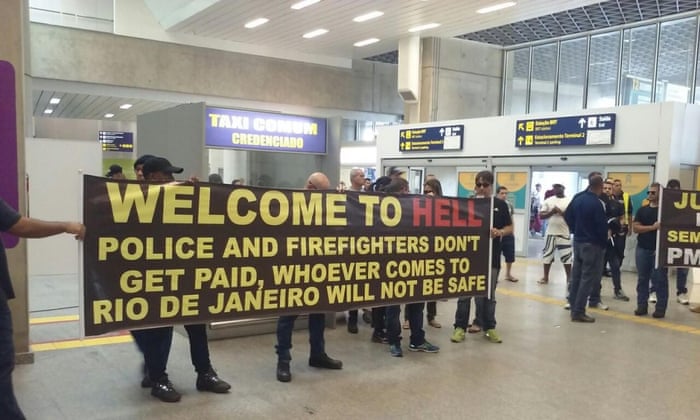 Angry civil police officers staged a strike on Monday, with one contingent greeting visitors at Rio’s international airport with this sign. Photograph: airstrike/imgur

Rio de Janeiro has cut budgets across the board, delaying officers’ salaries, halting patrols and fueling worries about safety at the world’s premier sporting event

Just weeks ahead of the Olympic Games, police helicopters are grounded, patrol cars are parked and Rio de Janeiro’s security forces are so pressed for funds that some have to beg for donations of pens, cleaning supplies and even toilet paper, fueling worries about safety at the world’s premier sporting event.

Brazil is suffering the worst recession in decades and Rio’s acting governor declared a state of financial disaster this month, largely to bolster spending on security as the world’s spotlight turns to the city.

“How are people going to feel protected in a city without security,” Gov Francisco Dornelles told Rio’s O Globo newspaper. “We can have a great Olympics, but if some steps aren’t taken, it can be a big failure.”

Rio state has slashed budgets across the board, including that of the police. Helicopters have been grounded and more than half of the civil police’s fleet of cars has been idled in a bid to save on gas. Even officers’ salaries have been delayed.

Angry civil police officers staged a strike on Monday, with one contingent greeting visitors at Rio’s international airport with a sign reading, in English: “Welcome to Hell. Police and firefighters don’t get paid; Whoever comes to Rio de Janeiro will not be safe.”

The cuts have led to “a very big crisis in … the self-esteem of the policemen,” said Ilona Szabo, executive director of the Instituto Igarape, a Rio-based security and social issues think tank.

Even so, she said the sheer number of officers on the streets should help avoid a major security breech at Olympic sites and in Rio’s beachfront neighborhoods. Olympic officials insist Rio’s fiscal problems won’t affect security for the games.

Some 85,000 police and soldiers – roughly twice the security contingent at the London Olympics – are to be deployed during the 5-21 August games, which are expected to draw an estimated 350,000 to 500,000 foreigners to a city of 12 million people where armed muggings, stray bullets and turf wars between heavily armed drug gangs are routine.

Rio’s civil police, who oversee investigations while the military police handle patrols, acknowledged in a statement that “some stations” are receiving donated office supplies.

“In March, the head of the police station here came to me and said she didn’t even have paper to print out the incident reports,” said Maria Thereza Sombra, an 81-year-old former teacher who heads the neighborhood association in Rio’s tony Morro da Viuva area. “That’s how far we’ve fallen. I’ve never seen it this bad.”

The recession that saw Brazil’s economy shrink by four percentage points last year has taken a particularly tough toll on Rio. During the boom years, the state awarded billions in tax exemptions to companies ranging from industrial giants to small-scale jewelry dealers, nightclubs, restaurants and love hotels. Tax revenues sunk further with the fall of oil prices that fund much of the state’s budget.

Local newspapers recently reported that the balance in state coffers had dwindled at one point to around $10,000. The salaries of some state workers are being paid in installments and some retirees are now receiving their pensions months late.

Gov Dornelles last week declared a state of financial disaster that paved the way for 2.9bn Brazilian real ($860m) in emergency aid from the federal government. The funds are earmarked for Olympic security – fanning hopes that the situation of Rio’s beleaguered police may improve…