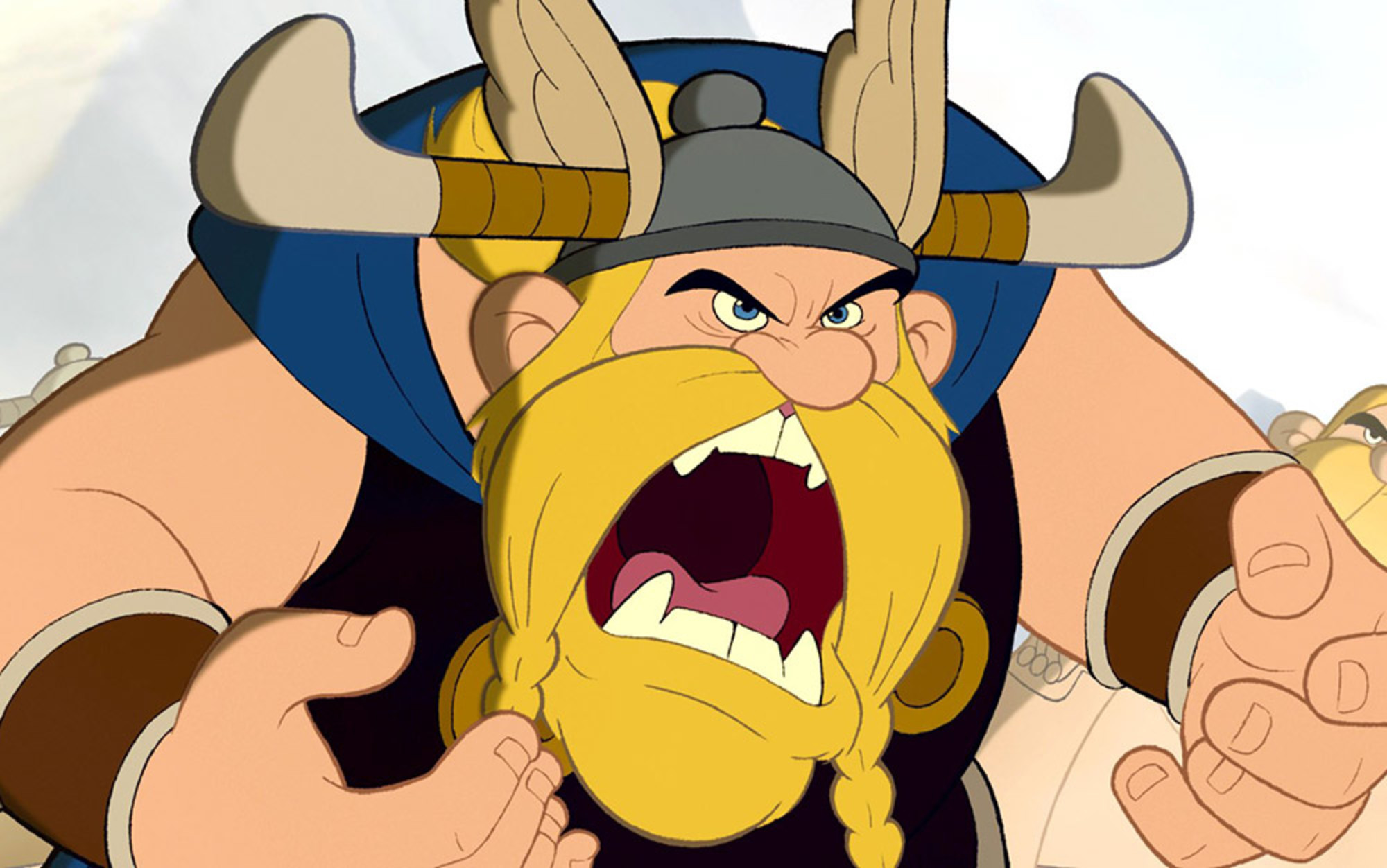 Beserk! Almost certainly, the superhuman strength and focus was the result of ingestion of hallucinogenic mushrooms. From Asterix and the Vikings, 2006. Photo by Rex Features

Killing people is hard and horrible. No wonder that warriors, from berserkers to jihadis, need drugs to get in the mood

Peter Frankopan is the director of the Oxford Centre for Byzantine Research and a senior research fellow at Worcester College, Oxford. His most recent book is The Silk Roads: A New History of the World (2015).

All of Gaul is divided into three parts,’ wrote Julius Caesar at the start of his Gallic Wars. ‘No, four,’ corrected one author writing slightly later, ‘for one small village of indomitable Gauls still holds out against the Roman invaders.’ It was, of course, the French comic-book hero Asterix’s unnamed Breton village. The secret of the success of Asterix and his fellow villagers was their superhuman strength – that is, when their druid was willing to make them some of his secret potion. One gulp made Asterix’s Gauls invincible, irresistible in attack and extraordinary in defence. The only thing the potion could not cure was the village bard, Cacophonix, whose terrible voice alone was immune to the magic drug of Getafix, the village’s druid and superchemist.

Having grown up reading the Asterix books, I wondered about supplements that turned normal soldiers into heroes. Valour, bravery and virtue were all prized characteristics in the ancient texts that captivated me. In fact, in Greek and Latin, the words for courage (‘ἀνδρεία’ and ‘virtus’) derive from the word for man (‘ἀνδρὸς’ and ‘vir’). Being a man in the classical world meant being brave. Heroes such as Hector, Ajax, Agamemnon and Odysseus relied on their wits, muscles and character alone. Alexander the Great, Julius Caesar and Augustus likewise took difficult decisions, earning the respect of both their lieutenants and their foot-soldiers.

Further east, Kings of Persia presented themselves as just and brave rulers. In China, the philosophy of Mengzi (Mencius) taught men to consider personal bravery as an essential part of a purposeful life. Being strong meant being blessed by the gods – or even being part-divine, as was the case with Herakles, son of Zeus, or Achilles, son of the nymph Thetis. Ancient heroes sometimes turned to substances in order to alter their moods, or their minds. In the Odyssey, for example, Odysseus and his men find themselves in the land of the Lotus Eaters, which is populated by ‘men who make food of flowers’. The Lotus Eaters are extraordinarily relaxed. Odysseus’s scouts sink into repose as soon as they taste the ‘honeyed fruit’ of the lotus flower, which makes Odysseus’s men so deeply indolent that they refuse to return to their own camp. Resolving not to move, they ignore all orders and give up any thought of returning home.

Ancient China, the Arabic-speaking world and Europe all showed deep interest in the remedial and medicinal qualities of plants and seeds. For example, cinnamon was used in treatments of the heart, stomach and head in China, Persia and the Eastern Mediterranean, where it was prescribed by Dioscorides 2,000 years ago as being helpful in establishing regular cycles of menstruation. Cinnamon was also prescribed in medieval medical manuals as helping ‘the man whose head is heavy and stuffed’ with mucus. Later pharmacy books produced in Spain outlined at length how useful nutmeg oil was as a treatment for diarrhoea and vomiting, as well as fighting the common cold, and also reported that cardamom oil soothed the intestines and helped reduce flatulence.

The list of uses of spices and herbs is a long one. In the eighth century, Charlemagne ordered the large-scale cultivation of mallow after becoming convinced of its healing powers when it came to battlefield wounds. Some ancient medical research extended beyond the treatment of injuries into more adventurous pursuits. An Arabic manual written in the Middle Ages contains a chapter entitled ‘Prescriptions for Increasing the Dimensions of Small Members and for Making them Splendid’. It suggests rubbing a mixture of honey and ginger onto the private parts. The medical manual promised an effect so powerful and productive of such pleasure that the man’s sexual partner would ‘object to him getting off her again’.

Roughly contemporary to the Homeric epics are the Sanskrit Rig Vedas. More than 3,000 years old, they espouse cannabis as ‘a source of happiness’, ‘a liberator’ from anxiety, and ‘a joy-giver’, such that a guardian angel was said to live within its leaves. Ancient Chinese texts that mention hemp say nothing about the effects of cannabis – until the first century BC, when one text, thePen Ts’ao Ching, notes that ‘if taken in excess [the fruit of the hemp] will produce hallucinations (literally ‘seeing devils’). If taken over a long term, it makes one communicate with spirits and lightens one’s body.’

The use of cannabis as an intoxicant was known in India and Iran 3,000 years ago, and became so widespread in the Middle East that some practitioners warned of the long-term effect of regular usage. Not all listened. In the late 11th century, young men flocked to a charismatic leader named Hasan i-Saban. Marco Polo referred to i-Saban as ‘the old man of the mountain’. According to the Venetian traveller, he gave his followers copious amounts of hashish (literally, ‘grass’ in Arabic). He also supplied them with sensuous women, and – in return – they murdered Hasan’s political rivals. His followers became known as the Hashishiyans, lending their name to today’s assassins…