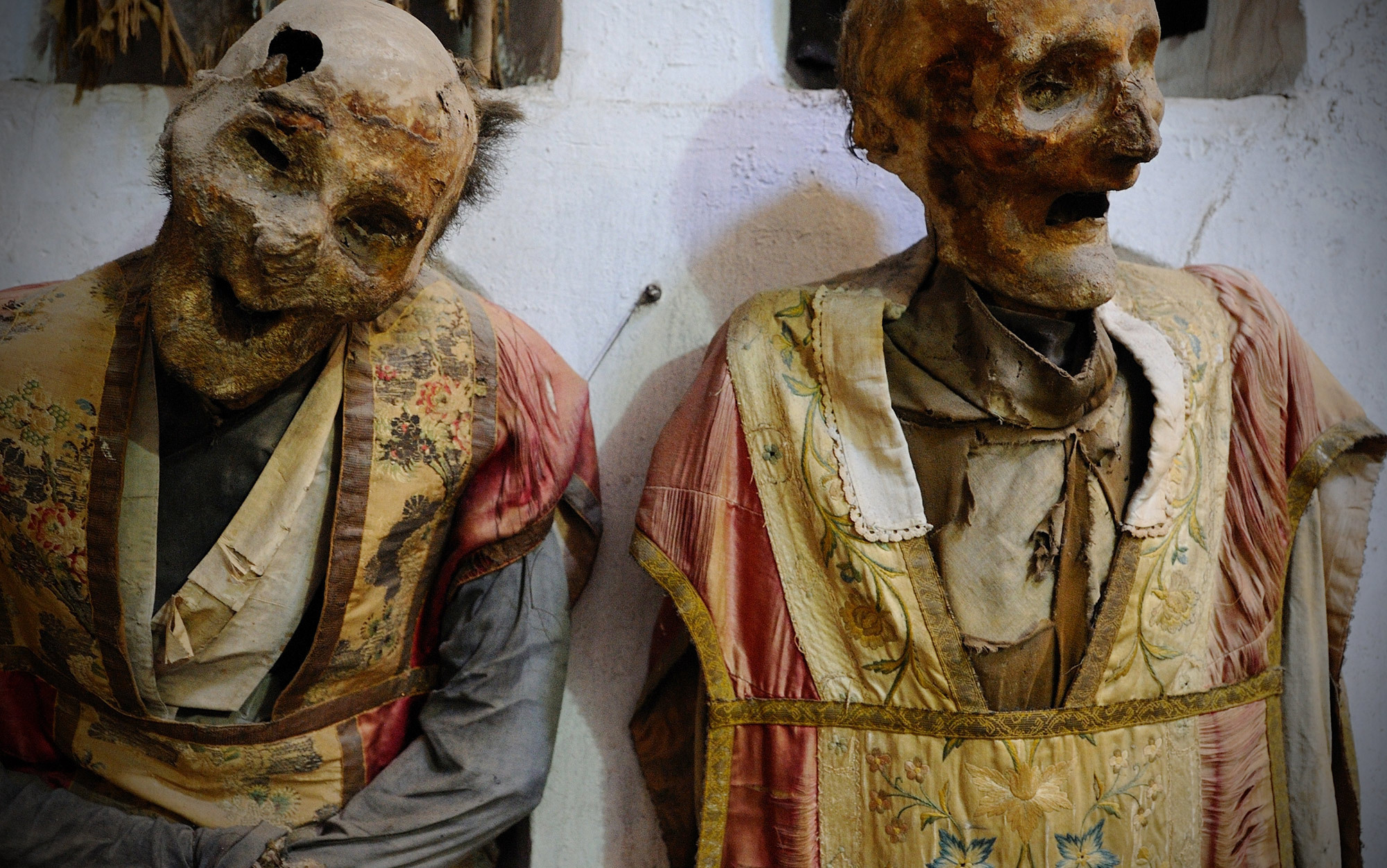 In this febrile cultural moment filled with fear of the Other, horror has achieved the status of true art

by M M Owen is a British author who has published fiction and non-fiction in a range of places. He obtained his PhD at the University of British Columbia, and now runs a design and animation studio called Misfit Productions and an independent press called Misfit Press.

In Ray Bradbury’s horror short story, ‘The Next in Line’ (1955), a woman visits the catacombs in Guanajuato, Mexico. Mummified bodies line the walls. Lying awake the next night, haunted by her macabre tour, she finds that her heart ‘was a bellows forever blowing upon a little coal of fear … an ingrown light which her inner eyes stared upon with unwanting fascination’.

Our present era is one in which the heart of culture is blowing hard upon a coal of fear, and the fascination is everywhere. By popular consent, horror has been experiencing what critics feel obliged to label a ‘golden age’. In terms of ticket sales, 2017 was the biggest year in the history of horror cinema, and in 2018, Hereditary and A Quiet Place have been record-breaking successes. In both the United States and the United Kingdom, sales of horror literature are up year over year – an uptick that industry folk partly attribute to the wild popularity of Netflix’s Stranger Things (2016-). And the success isn’t merely commercial. Traditionally a rather maligned genre, these days horror is basking in the glow of critical respectability. As The New York Times remarked this June, horror ‘has never been more bankable and celebrated than it is right now’.

As any historian of the genre will tell you, horror has had previous golden ages. Perhaps ours is just a random quirk of popular taste. But perhaps not. Perhaps we are intoxicated by horror today because the genre is serving a function that others aren’t. Can’t. Horror’s roots run deep, but they twist themselves into forms very modern. The imagination’s conversion of fear into art offers a dark and piercing mirror.

My earliest horror memory is Stay Out of the Basement (1992), one of R L Stine’s Goosebumps series of young adult novels. In the story, a botanist accidently creates a hybrid plant clone of himself. When the clone comes to life, he tries to steal his humanoid self’s life. The botanist’s children unmask the imposter, and in a mess of green blood and plant mush, the clone is felled with an axe. The rescued father disposes of the rest of the mutating plant matter, and the family is all set to live happily ever after. But at the very end, the daughter is standing in the garden and feels a small plant nudging her ankle. The plant whispers to her: ‘Please – help me. I’m your father.’ Stay Out of the Basement is no masterpiece, but I was young, and it struck me cold.

Horror is what anthropologists call biocultural. It is about fears we carry because we are primates with a certain evolved biology: the corruption of the flesh, the loss of our offspring. It is also about fears unique to our sociocultural moment: the potential danger of genetically modifying plants. The first type of fear is universal; the second is more flexible and contextual. Their cold currents meet where all great art does its work, down among the bottomless caves on the seabed of consciousness. Lurking here, a vision of myself paralysed in the dirt, invisible to those I love.

Horror has always been with us. Prehistoric cave paintings are rife with the animal-human hybrids that remain a motif of horror to this day. Every folktale tradition on Earth contains tales of malevolent creatures, petrifying ghosts and graphic violence. The classics are frequently horrifying: in Homer’s Odyssey, when the Cyclops encounters Odysseus’ men, the monster eats them, ‘entrails, flesh and the marrowy bones alike’.

We have always told horror stories, and we always will. Because horror is an artistic expression of an ontological truth: we are creatures formed in no small part by the things to which we are averse. Fear is a base ingredient of consciousness, partaking of brain circuits that are so ancient humans share them with all vertebrate lifeforms. As the neuroscientist Antonio Damasio has described, the whole weird soup of human feeling emerged as a result of our beginning to process whether to ‘approach or avoid … certain places or things or creatures’. Our cognition absorbs reality as a vast spectrum of potential encounters, and horror alchemises the dark end into art…