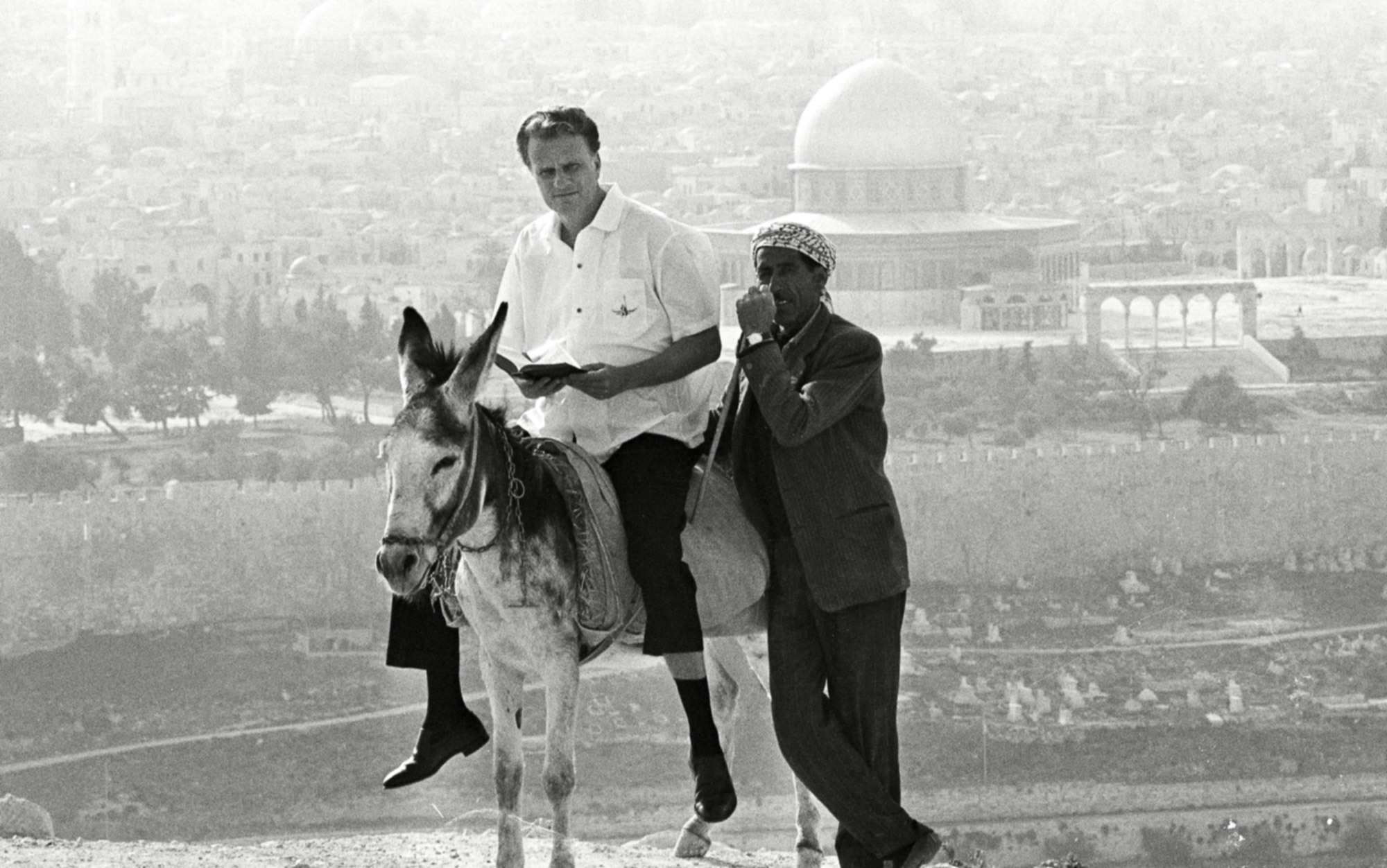 Evangelist Billy Graham in Jerusalem visiting holy places in the city in 1969. Photo by PW/AP/REX/Shutterstock

It’s one of the most successful, and in some ways unlikely, interfaith movements in the modern world

by Dan Hummel is a historian of American religion, politics, and foreign relations and currently the DPAA historian in residence postdoctoral fellow at the University of Wisconsin-Madison.

On 23 June 1969, at the Midtown Manhattan headquarters of the American Jewish Committee, the evangelist Billy Graham met with two dozen rabbis and Jewish leaders. According to one rabbi, the meeting was to allow Graham to convey ‘the need for dialogue and communication’ between American evangelicals and American Jews, and to find common ground by explaining ‘his relationship with Israel’. It was a pivotal moment in the American Jewish and evangelical Protestant interfaith relationship.

Though some of the Jewish leaders were wary of the ‘wild raving fundamentalist’, Graham won them over. He cited the Hebrew Scriptures, or Old Testament, to describe his understanding of God’s covenant with the Jewish people, and explained his support for Israel as recompense for past Christian anti-Judaism. ‘All Christians are guilty as far as Jewish experience was concerned,’ he said. Graham also spoke of his conversations with the Israeli prime minister Golda Meir, and assured American Jewish leaders that the United States’ president Richard Nixon was ‘extremely sympathetic’ to Israel.

Today, for many evangelicals, Christian Zionism is no mere side issue. They believe that they are not only correcting the ancient injustice of anti-Semitism, but contributing to the salvation of the world and the completion of God’s redemptive plans. It is, for many, the metanarrative that makes sense of the biblical drama and current events, and provides a road map for the future.

That 1969 meeting contained all the essential elements characterising the exceptional support that evangelical Protestants in the US give to the state of Israel. The spirit of this meeting has since been replicated dozens of times. Graham weaved an evangelical reading of the Bible, a deep-seated longing to aid Israel, and the self-interested power calculations of both communities into a language of interfaith rapprochement and shared Jewish-Christian interests. His Jewish colleagues, concerned about the future of Israel, and cognisant of the evangelicals’ influence, were eager to create new lines of cooperation.

Pressed on theology, Graham would have affirmed his commitment to the exclusive truth claims of Christianity, while the American Jewish leaders undoubtedly retained their own theological exclusivity. Still, their peculiar set of shared interests led to a powerful and lasting partnership. Their alliance is one of the most notable instances of interfaith cooperation in recent history.

In the wake of Europe’s religious wars, exclusive claims to religious truth – ‘theological intolerance’, as Jean-Jacques Rousseau called them in The Social Contract (1762) – grew to be seen as an impediment to civil relations. ‘It is impossible to live at peace with those we regard as damned,’ wrote Rousseau, ‘to love them would be to hate God who punishes them: we positively must either reclaim or torment them.’ But the alliance of American evangelicals and American Jews proves that Rousseau’s dictum is not necessarily true.

Close to 50 years after that meeting, evangelicals and Jews remain at loggerheads on most theological and cultural issues. In the face of these vast differences, they have managed to unite – in ever closer cooperation – over support for Israel. No individual has inherited Graham’s stature atop American evangelicalism, and his multiple successors do not share uniform attitudes toward Israel. But many of them lead influential Christian Zionist organisations that constitute one of the most successful single-issue movements in modern US politics.

Christian Zionists have achieved exceptional unity and influence on support for Israel, using a sophisticated combination of religious, historical and political components. They emphasise a potent type of interfaith engagement that elevates biblical covenantal language, and offer a sanitised version of the Jewish-Christian past, yet also orient their work toward the pragmatic goal of increasing political influence…