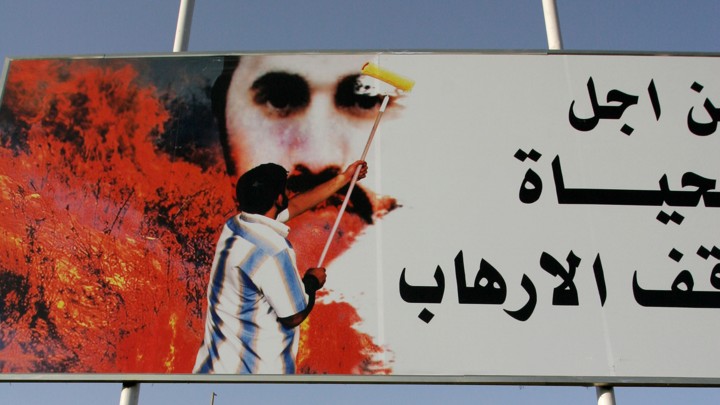 A poster in Baghdad depicts a man painting over a picture of Abu Musab al-Zarqawi.MOHAMMED HATO / AP

A secret biography suggests that Abu Ali al-Anbari defined the group’s radical approach more than any other person.

Co-author of ISIS: Inside the Army of Terror

Most historians of the Islamic State agree that the group emerged out of al-Qaeda in Iraq as a response to the U.S. invasion in 2003. They also agree that it was shaped primarily by a Jordanian jihadist and the eventual head of al-Qaeda in Iraq, Abu Musab al-Zarqawi. The Jordanian had a dark vision: He wished to fuel a civil war between Sunnis and Shiites and establish a caliphate. Although he was killed in 2006, his vision was realized in 2014—the year isis overran northern Iraq and eastern Syria.

Narratives about the origins of Islamic State ideology often focus on the fact that Zarqawi and Osama bin Laden, both Sunni extremists, diverged on the idea of fighting Shiites and on questions of takfir, or excommunication. Such differences, the story goes, were reinforced in Iraq and eventually led to the split between isis and al-Qaeda. Based on this set of assumptions, many conclude that Zarqawi must have provided the intellectual framework for isis.

Recently, I came to question the conventional wisdom. The groundwork for isiswas arguably laid long before the invasion, and if there was one person responsible for the group’s modus operandi, it was Abdulrahman al-Qaduli, an Iraqi from Nineveh better known by his nom de guerre, Abu Ali al-Anbari—not Zarqawi. It was Anbari, Zarqawi’s No. 2 in his al-Qaeda years, who defined the Islamic State’s radical approach more than any other person; his influence was more systematic, longer lasting, and deeper than that of Zarqawi.

A month ago, I obtained a 93-page document that chronicles Anbari’s life, as well as the extremist landscape around him in 1990s Iraq. Anbari’s son, Abdullah, wrote the biography for the internal use of the Islamic State, which published parts of it in its weekly Arabic magazine, Al-Naba, in 2016, shortly after Anbari’s killing. Dissidents within isis recently spread the full document on social media, which is how I came across it. Abdullah has stated that the biography was based on 16 years of working closely with his father, a diary that Anbari kept, and firsthand accounts of Anbari from fellow isis members.In addition to Abdullah’s biography, I’m relying here on a series of lectures that Anbari delivered in 2014 and 2015, and on my notes from interviews with members of the organization and Syrian rebels. All in all, it’s become clear to me that Zarqawi was likely influenced by Anbari, not the other way around.

Anbari was born in northern Iraq in 1959 into a Turkified family of Arab and Armenian descent. The household was devout. Abdullah tells the story of when a young Anbari wanted to buy pigeons. His father told him he had to ask the local imam if keeping pigeons was sound from an Islamic-law standpoint. The imam told him it was a “devilish” habit, so he dropped the idea. (In some Arab countries, testimony from pigeon keepers is inadmissible in court; Arabs associate them with dishonesty, as their profession is thought to involve stealing pigeons owned by others and then lying about it.)

Anbari studied Sharia after he completed elementary school, at an institute in the northern Iraqi city of Tal Afar. He graduated from the University of Baghdad in 1982 with a degree in Islamic studies. (He shares an alma mater with the Islamic State’s current leader, Abu Bakr al-Baghdadi.) After graduation, he joined the Iraqi army, served for seven years, and fought in the Iran-Iraq war. “He obtained military and religious training, a rare combination,” his son wrote.

After Anbari’s military service, according to the biography, he was assigned to teach a Sharia class in a small, diverse town called Mujama Barzan. One day, a rich citizen of the town invited ghajars—an ethnic group similar to the Roma—to pitch a tent and throw a party with music and dancing. Anbari was enraged by the news; the party seemed to him profoundly sacrilegious. He offered 10 extra marks to any student who did not attend, but that wasn’t enough of a statement. Anbari considered killing the ghajars, but he had no gun. He then asked one of his students to bring him gasoline, with the idea that he would burn the ghajars alive inside their tent. Ultimately, he simply delivered a sermon against the ghajars and the planned, profane celebration. Under intense pressure, the rich sponsor sent the ghajars away. But the incident left Anbari thinking: There is something wrong with a government that would even consider allowing such an event to take place…