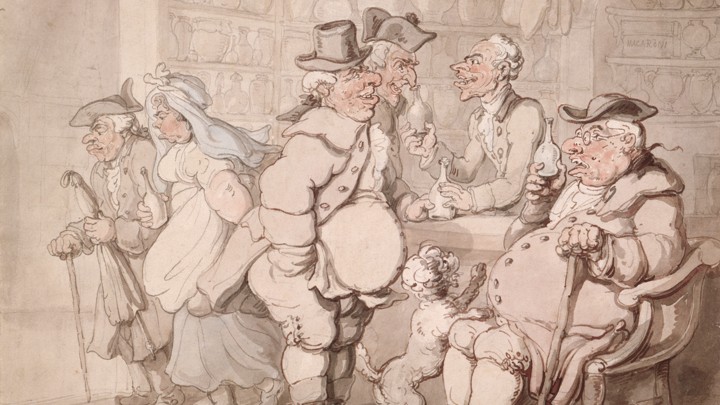 One night in 1731, Cornelia di Bandi burst into flames. When the 62-year-old Italian countess was found the next morning, her head and torso had been reduced to ash and grease.Only her arms and legs remained intact. After examining what was left of her body, a local physician concluded, in a report cited years later, that the conflagration “was caused in her entrails” by the variety of combustible materials to be found there, including alcohol and fat, “an oily liquid … of an easily combustible nature.” An early instance of what would come to be known as “spontaneous human combustion,” di Bandi’s case was one of many later studied by the French agronomist Pierre-Aimé Lair. If there was a common denominator to these otherwise unexplained phenomena, Lair concluded, it was the fact that most of them involved corpulent older women with a penchant for drink, thus combining fat and alcohol in a literally explosive mix. In addition to the fuel provided by excess body fat, which was rendered even more combustible when “penetrated by alcoholic substances,” surplus fat was said to create higher levels of hydrogen, making the body especially flammable. Lair concluded:

Thus there is no cause for surprise that old women, who are in general fatter and more given to drunkenness, and who are often motionless like inanimate masses, during the moment of intoxication, should experience the effects of combustion.

Whatever Lair might have thought about fat old ladies who drank too much, in his report fat is about little more than the chemicals that composed it and the properties that rendered them combustible. Scientifically breaking the stuff of life down into its components was part of a general process of quantification that gained momentum during the 17th century to become pervasive in the 18th and 19th.

This was the period during which corpulence underwent a process of medicalization that would eventually contribute to our present views of obesity as a disease. Older ideas about fatness and mirth were reconceptualized in more mechanistic terms, which would only gain momentum in the following years. With the development of height and weight tables in the 19th century, the stage was set for the further development of ideas about metabolism, nutritional requirements, and eventually the body-mass index of our own time. But at the start of the modern era, fat played a very different role in Western cultures—that of a medical commodity.

Whether procured from plant, animal, or human sources, in one form or another fat has been an important element in the European pharmacopoeia since ancient times. For reasons that are not quite clear, a medicinal interest in human fat was especially pronounced in the 16th and 17th centuries. In 1543, the physician Andreas Vesalius instructed anatomists who boiled bones for the study of skeletons to carefully collect the layer of fat “for the benefit of the masses, who ascribe to it a considerable efficacy in obliterating scars and fostering the growth of nerves and tendons.” Vesalius knew what he was talking about. At the time, human fat was widely considered—and not just by “the masses”—to be efficacious in healing wounds, and was typically harvested from the recently deceased. In October 1601, after a particularly bloody battle during the Siege of Ostend, Dutch surgeons descended upon the battlefield to return with “bags full of human fat,” presumably to treat their own soldiers’ wounds.If the fat of warriors was efficacious, that of executed criminals was easier to lay one’s hands on. What was called “poor sinner’s fat” was rendered from the bodies of the recently executed and used to treat sprains, broken bones, and arthritis. Beyond such uses, human fat was also prescribed as a painkiller or to treat sciatica and rheumatism, while dead men’s sweat was collected for the treatment of hemorrhoids. Until the mid-18th century, executioners in the city of Munich, who often prescribed and administered homemade remedies from the corpses of their doomed clients, had a lucrative trade in the fat they delivered to physicians by the pound…