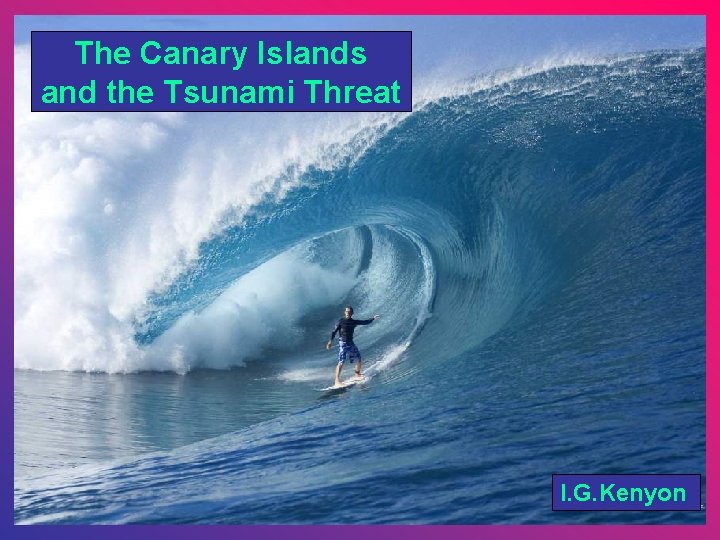 The Canary Islands and the Tsunami Threat I. G. Kenyon 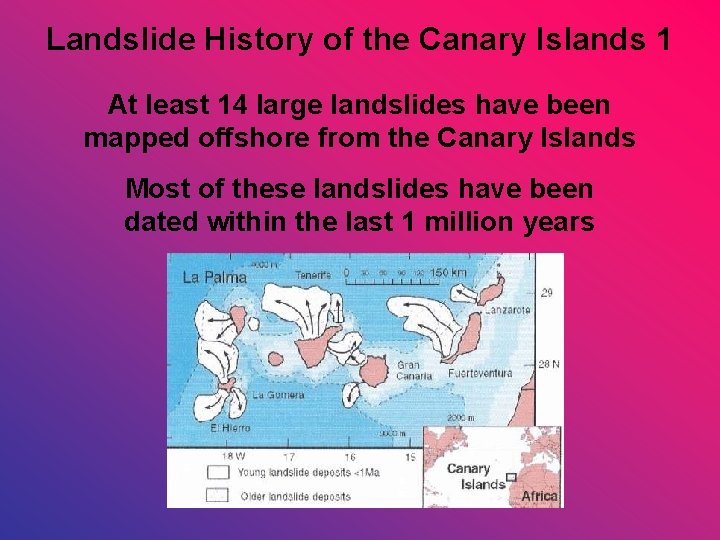 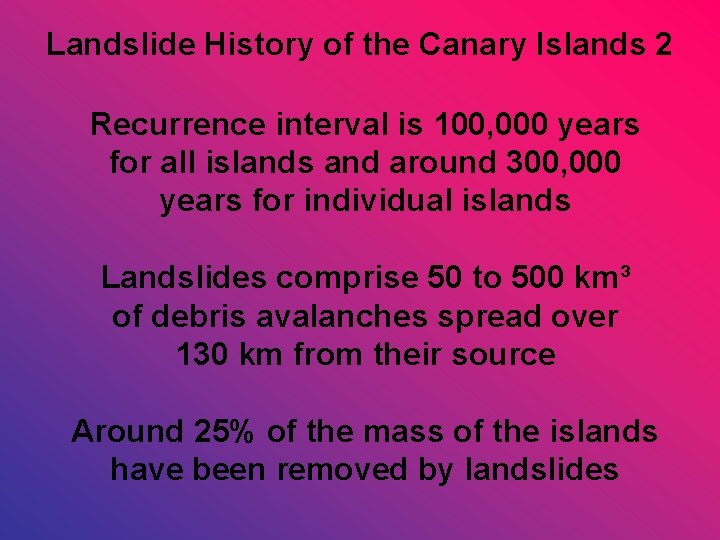 Landslide History of the Canary Islands 2 Recurrence interval is 100, 000 years for all islands and around 300, 000 years for individual islands Landslides comprise 50 to 500 km³ of debris avalanches spread over 130 km from their source Around 25% of the mass of the islands have been removed by landslides 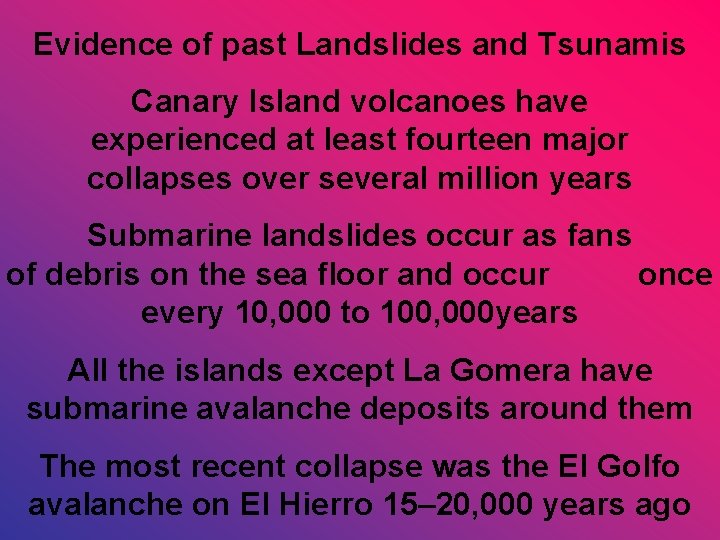 Evidence of past Landslides and Tsunamis Canary Island volcanoes have experienced at least fourteen major collapses over several million years Submarine landslides occur as fans of debris on the sea floor and occur once every 10, 000 to 100, 000 years All the islands except La Gomera have submarine avalanche deposits around them The most recent collapse was the El Golfo avalanche on El Hierro 15– 20, 000 years ago 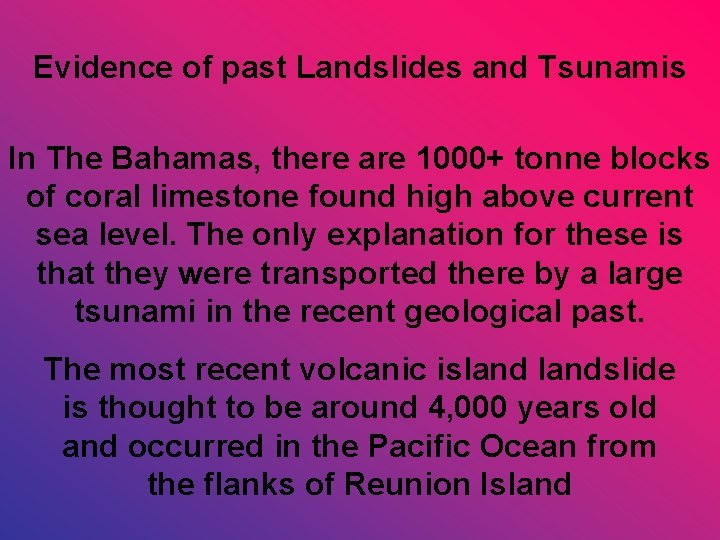 Evidence of past Landslides and Tsunamis In The Bahamas, there are 1000+ tonne blocks of coral limestone found high above current sea level. The only explanation for these is that they were transported there by a large tsunami in the recent geological past. The most recent volcanic islandslide is thought to be around 4, 000 years old and occurred in the Pacific Ocean from the flanks of Reunion Island 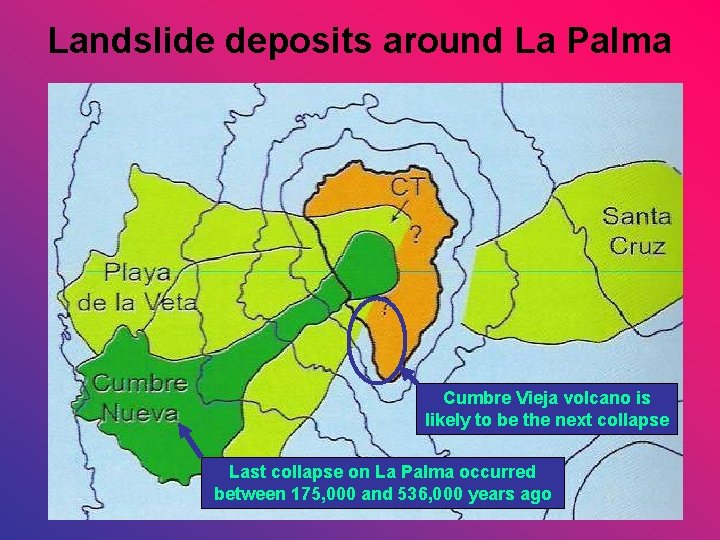 Landslide deposits around La Palma Cumbre Vieja volcano is likely to be the next collapse Last collapse on La Palma occurred between 175, 000 and 536, 000 years ago 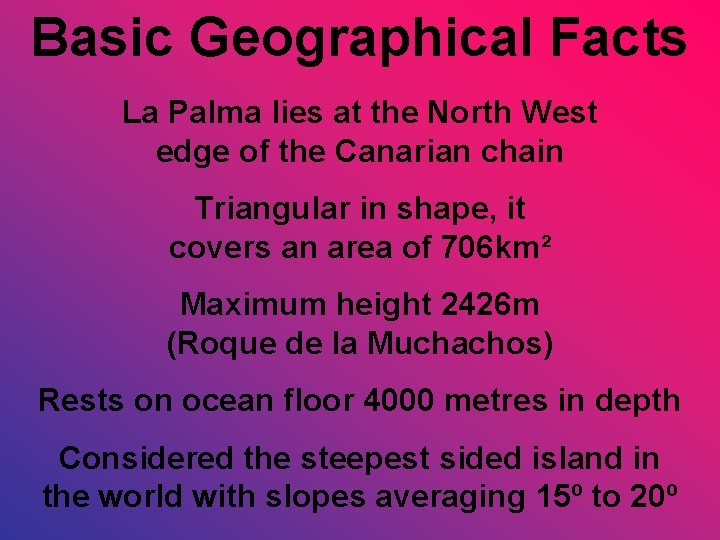 Basic Geographical Facts La Palma lies at the North West edge of the Canarian chain Triangular in shape, it covers an area of 706 km² Maximum height 2426 m (Roque de la Muchachos) Rests on ocean floor 4000 metres in depth Considered the steepest sided island in the world with slopes averaging 15º to 20º 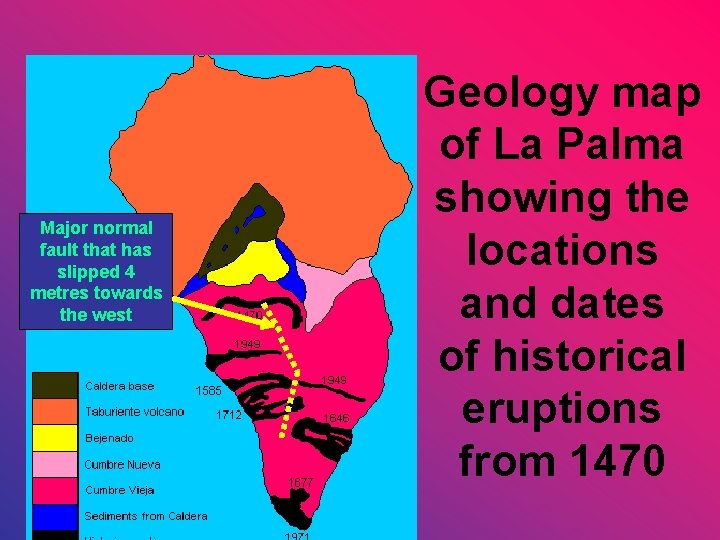 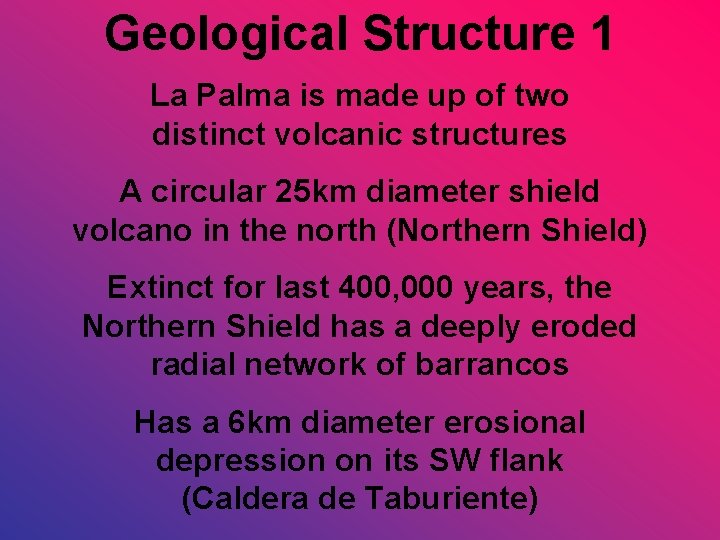 Geological Structure 1 La Palma is made up of two distinct volcanic structures A circular 25 km diameter shield volcano in the north (Northern Shield) Extinct for last 400, 000 years, the Northern Shield has a deeply eroded radial network of barrancos Has a 6 km diameter erosional depression on its SW flank (Caldera de Taburiente) Geological Structure 2 A north-south elongated 20 km long Cumbre Vieja rift in the south Cumbre Vieja volcano highly active for last 120, 000 years Six eruptions in last 500 years, two of them in the 20 th century (1949 and 1971) Most active volcano in the Canary Islands over the last 125, 000 years 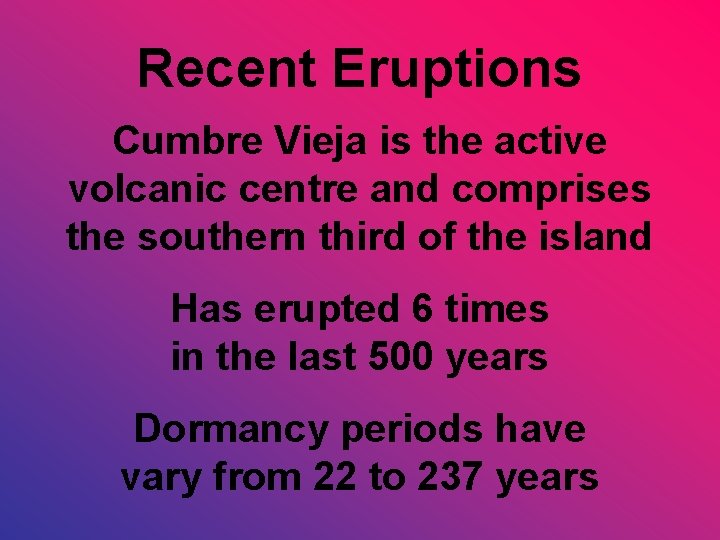 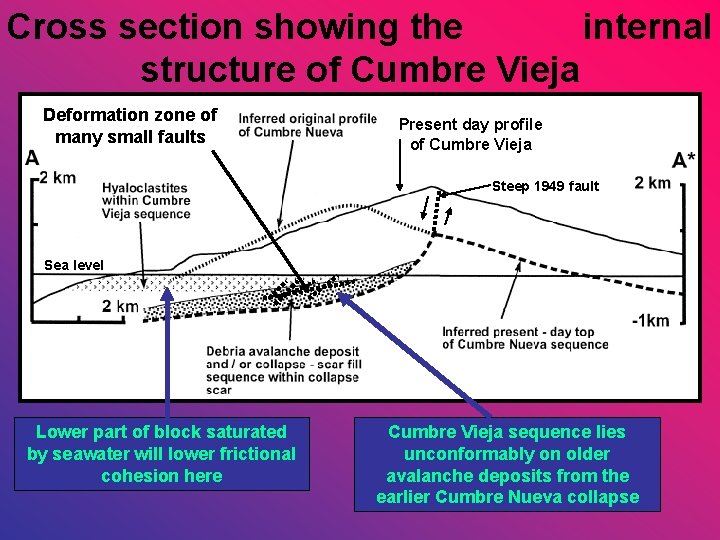 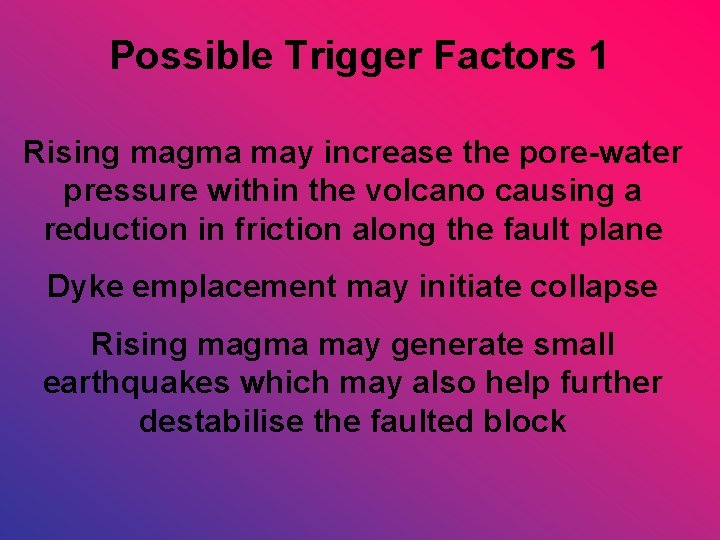 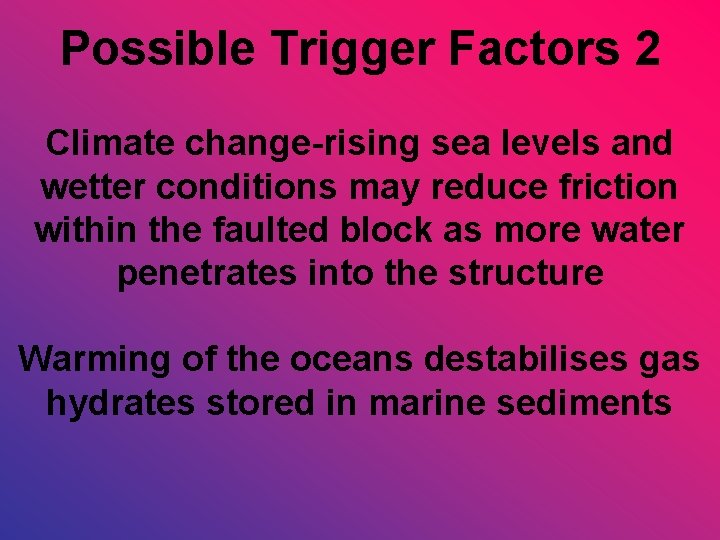 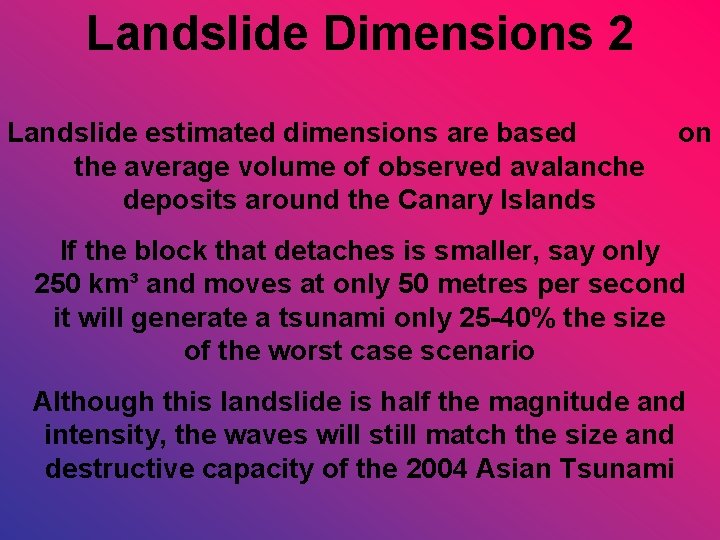 Landslide Dimensions 2 Landslide estimated dimensions are based the average volume of observed avalanche deposits around the Canary Islands on If the block that detaches is smaller, say only 250 km³ and moves at only 50 metres per second it will generate a tsunami only 25 -40% the size of the worst case scenario Although this landslide is half the magnitude and intensity, the waves will still match the size and destructive capacity of the 2004 Asian Tsunami 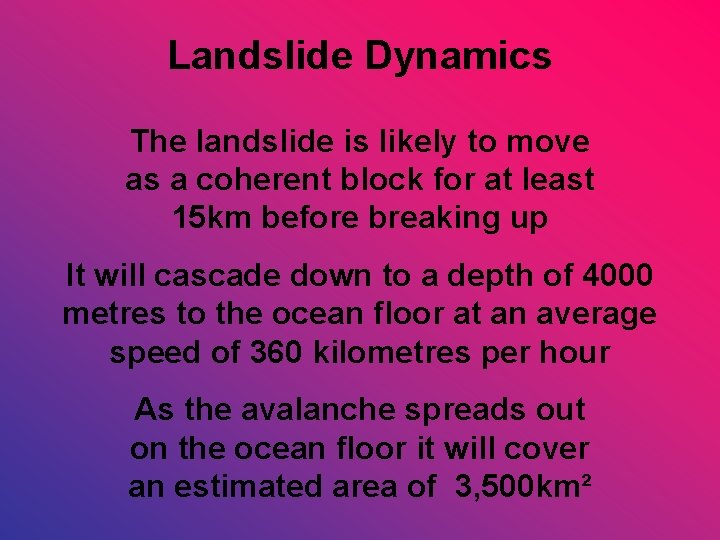 Landslide Dynamics The landslide is likely to move as a coherent block for at least 15 km before breaking up It will cascade down to a depth of 4000 metres to the ocean floor at an average speed of 360 kilometres per hour As the avalanche spreads out on the ocean floor it will cover an estimated area of 3, 500 km² 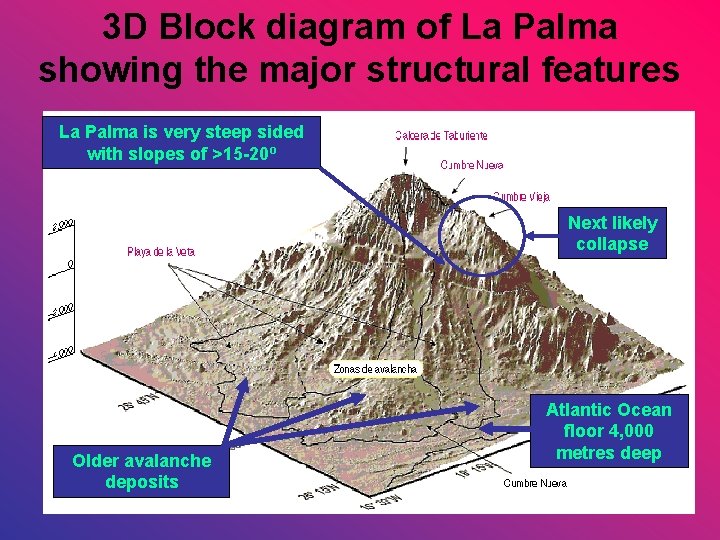 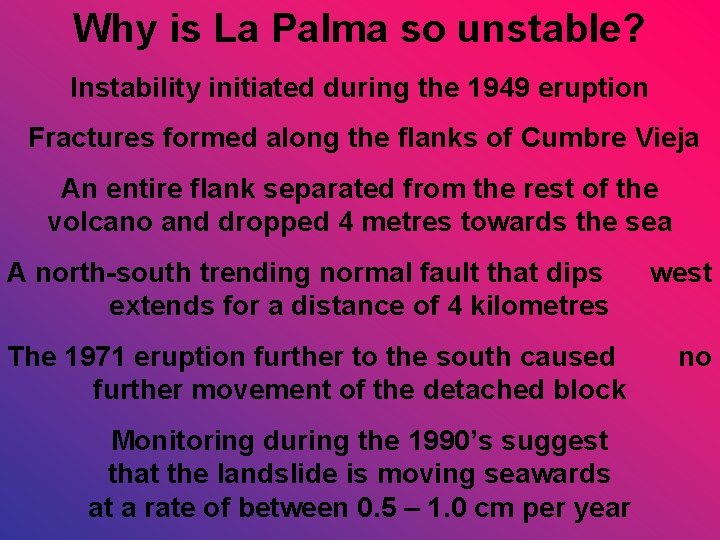 Why is La Palma so unstable? Instability initiated during the 1949 eruption Fractures formed along the flanks of Cumbre Vieja An entire flank separated from the rest of the volcano and dropped 4 metres towards the sea A north-south trending normal fault that dips extends for a distance of 4 kilometres The 1971 eruption further to the south caused further movement of the detached block Monitoring during the 1990’s suggest that the landslide is moving seawards at a rate of between 0. 5 – 1. 0 cm per year west no 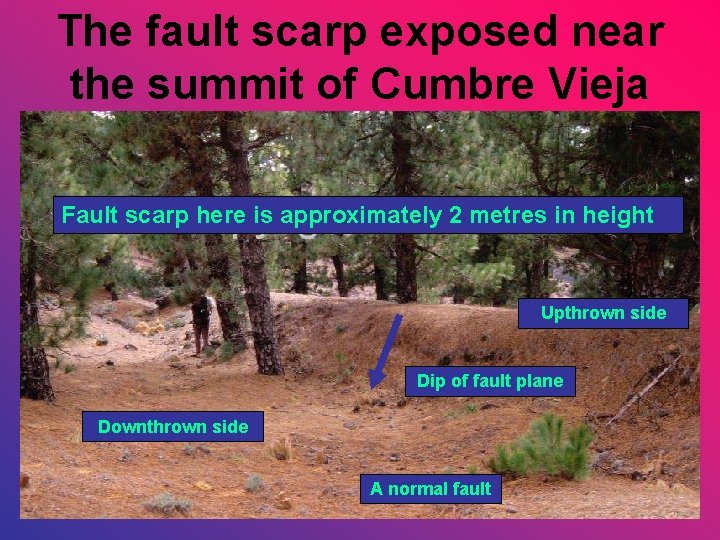 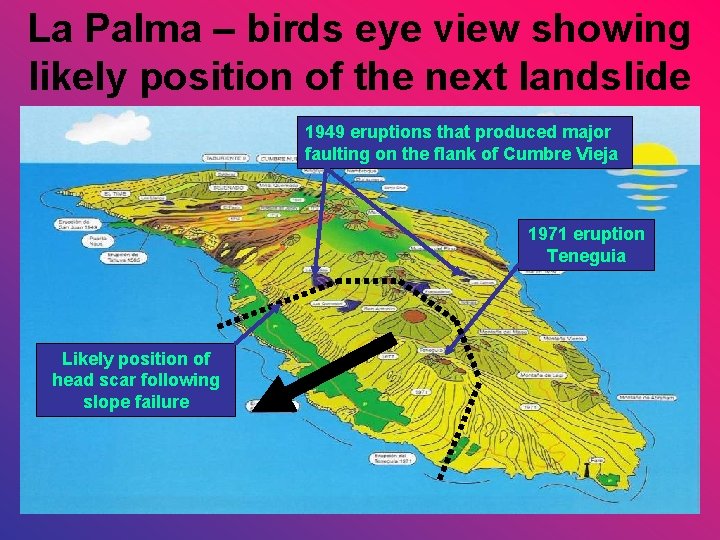 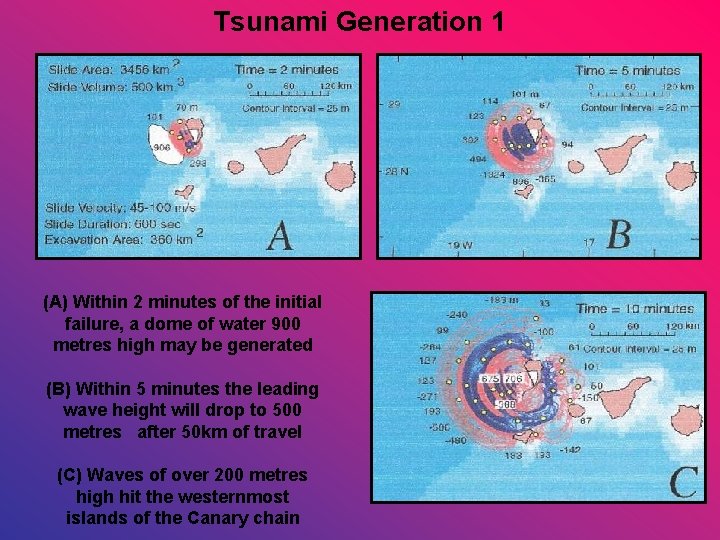 Tsunami Generation 1 (A) Within 2 minutes of the initial failure, a dome of water 900 metres high may be generated (B) Within 5 minutes the leading wave height will drop to 500 metres after 50 km of travel (C) Waves of over 200 metres high hit the westernmost islands of the Canary chain 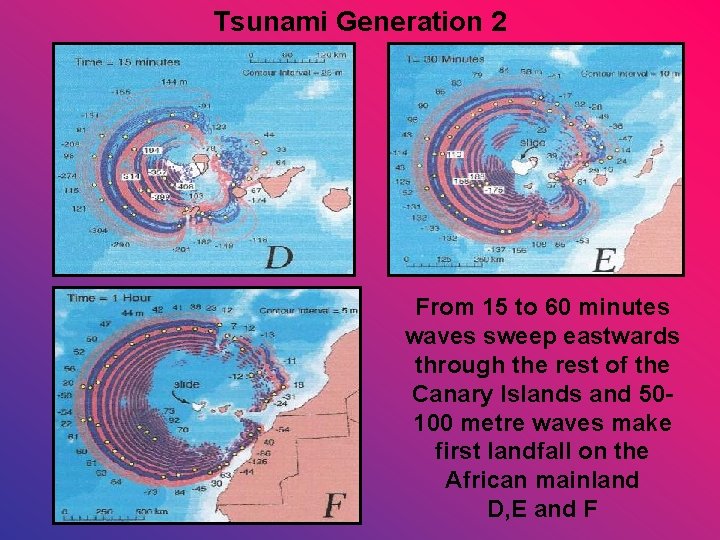 Tsunami Generation 2 From 15 to 60 minutes waves sweep eastwards through the rest of the Canary Islands and 50100 metre waves make first landfall on the African mainland D, E and F 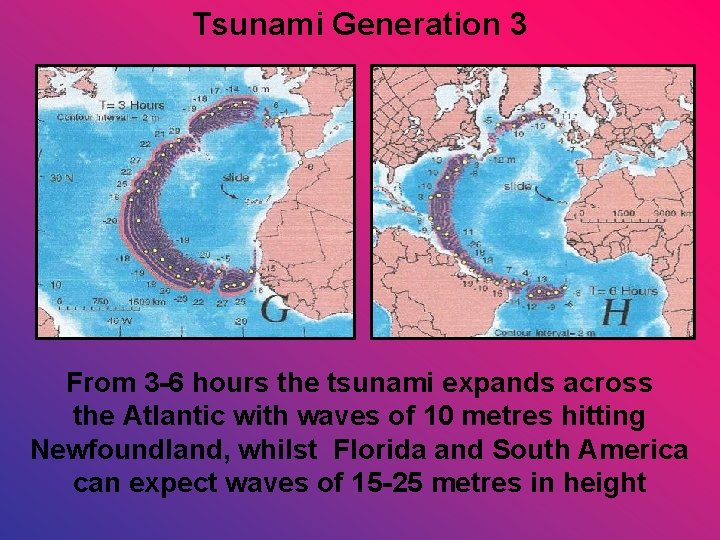 Tsunami Generation 3 From 3 -6 hours the tsunami expands across the Atlantic with waves of 10 metres hitting Newfoundland, whilst Florida and South America can expect waves of 15 -25 metres in height 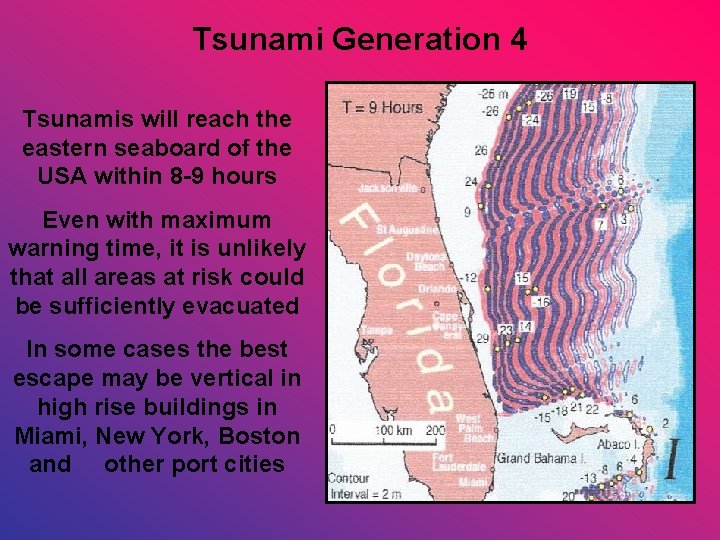 Tsunami Generation 4 Tsunamis will reach the eastern seaboard of the USA within 8 -9 hours Even with maximum warning time, it is unlikely that all areas at risk could be sufficiently evacuated In some cases the best escape may be vertical in high rise buildings in Miami, New York, Boston and other port cities 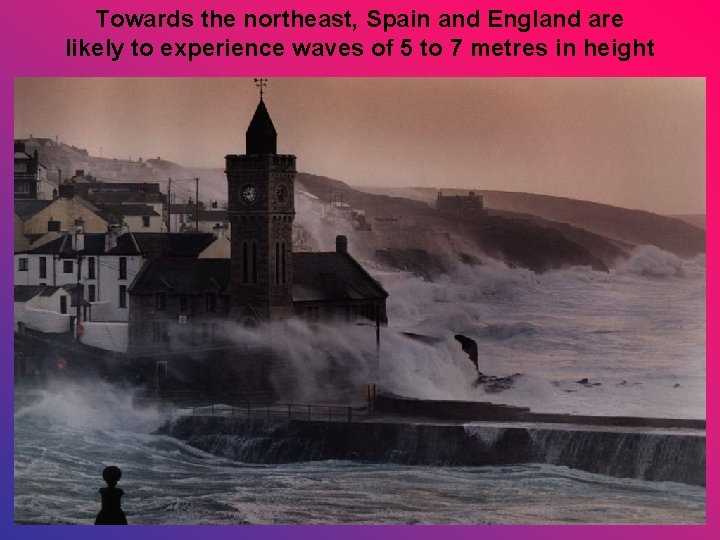 Towards the northeast, Spain and England are likely to experience waves of 5 to 7 metres in height 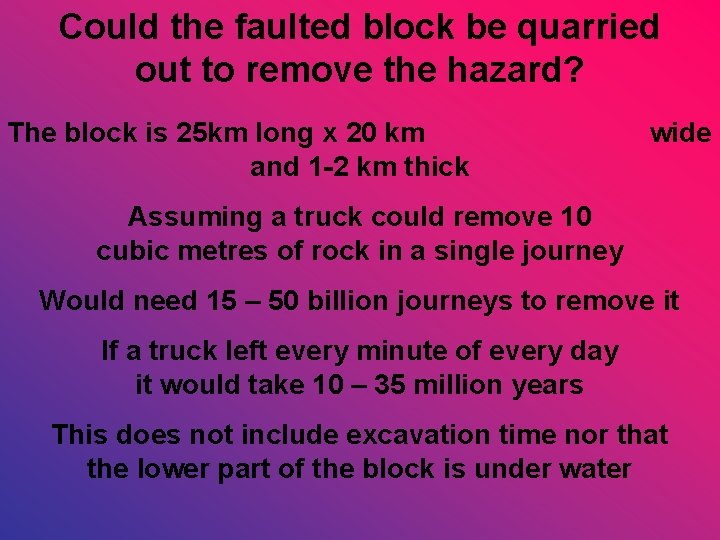 Could the faulted block be quarried out to remove the hazard? The block is 25 km long x 20 km and 1 -2 km thick wide Assuming a truck could remove 10 cubic metres of rock in a single journey Would need 15 – 50 billion journeys to remove it If a truck left every minute of every day it would take 10 – 35 million years This does not include excavation time nor that the lower part of the block is under water.